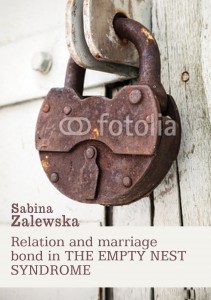 RELATIONS AND A MARRIAGE BOND IN THE EMPTY NEST SYNDROME.

The aim of this thesis is to analyse relations between spouses. The topic has been analysed a great many times by different authors.[1] Many researchers have tried to describe the basic elements of these relations, the bonds and the conditions in which they occur. Mostly, the literature does not differ between those two terms, their ranges overlap. That explains why they are used alternatively. Łobodzińska claims that the relations have their beginnings in the home where everyone feels safe, can face life and problems and thanks to the home atmosphere they can realise and support each other.[2] In the opinion of Diakowicz the cohesion of marriage relations depends on the co-existence of the personal bond, cultural bond and structural-functional bond. The tight bond is created when all three above bonds appear and there is no dissonance between them.[3] The research of Zalewska shows that families with strong marriage relations and a high level of satisfaction from the relationship are integrated satisfied marriages. In these marriages not only individual needs are met but also the partners’ needs are fulfilled which is an extremely important factor. [4] Niebrzydowski points out a close relationship between the activity and intensity of the bond between spouses.[5] Tyszka highlights the fact that the marriage bond relies on the recognition and acceptance of the spouse as a psycho-physical type.[6]

In this thesis three spheres proposed by Szopiński are taken as a basis. The bond characterized in Szopiński embraces three spheres of marriage relations; emotional, cognitive, and endeavouring which give feedback leading to the development of co-feeling, co-understanding and co-acting. [7]

This thesis touches upon the subject of the bond in marriage, when the spouses are “back together again”, after their children grow up and leave the house. The attempt of describing relations between spouses in this particular period is considered in this thesis. The detailed analysis is in three spheres: emotional, intellectual and the acting one.

The thesis consists of five chapters. Chapter one is a theoretical introduction to the basis of the topic.

Chapter II describes the concept of the bond in three basic spheres: co-feeling, co-understanding and co-acting which enables the introduction of the system of the terms which are essential while researching this field. There is a characteristic of married people whose children grown up. This is a particular period when a marriage faces particular problems. The problems are listed one by one: meeting needs, empathy, openness, satisfaction, conflict and forgiveness, appropriate communication, the ability to solve problems, the distribution of roles, values and common interests.

Chapter III contains the research proper. The basic concepts of the methodologies are introduced here, such as: the subject and the research method, how the research is conducted and the characteristics of the respondents.

Chapter IV contains a detailed analysis of the particular categories of bonds in the three spheres mentioned above.

The conclusion is an attempt to concisely summarise the most important results of the research. The endnote is a synthesis of all thesis.

Chapter V contains the basic characteristics of the so-called empty nest syndrome.[8] With particular consideration of the terminology related to this syndrome, the changes of the trait during marriage development in particular spheres, and the shaping of mutual relations. This has been supported by the results of research.

[8] Syndrome refers to periods of marriage when spouses are „together again and their children are independent”.